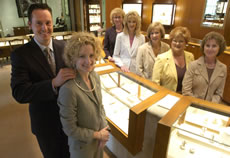 Flora Gems owners John and Lisa Flora and their staff accepted the honor of Small Business of the Year by The Chamber of Commerce for Decatur and Macon County for Flora Gems’ countless hours of involvement in raising money for the American Heart Association, Mount Zion Foundation and Junior Welfare Association. Staff pictured include Annette Taylor, Julie Shafer, Debbie Moore, Tonda Atchason and Ana Walker.

Four generations of Flora couples also have vowed to uphold the standards of cut, clarity, carat and color in the family’s jewelry business. “It’s nice to see the person that you love every day,” said John Flora, 27, his wife, Lisa, nodding in agreement. The pair owns Flora Gems at 101 N. Water St.; John’s parents owned the shop before him. Soon after, Lisa looked at about 50 rings in the store, and she picked the exact same ring. “We both have similar tastes,” John said.

And the Chamber of Commerce for Decatur and Macon County showered it with love on Monday, naming Flora Gems its Outstanding Small Business of the Year. The award officially will be presented to the business at the Chamber’s annual meeting on Thursday.

Recent winners of the award include Skeff Distributing, Jones and Thomas, Peerless Cleaners and Homer L. Chastain & Associates. A business must have fewer than 100 employees and have been in operation for at least five years to be eligible, said Chamber President Randy Prince.

Flora Gems has nine employees and is celebrating its 150th year in business. It has been a member of the Chamber for 103 years, Prince said.

The Curtis family founded the business in 1856, according to the application submitted for the Chamber’s consideration. Flora’s great-grandparents moved to Decatur from West Frankfort in 1921 and purchased the store.

“Buying the store took everything that they had financially, so my great-grandmother resorted to cutting up her beautiful wedding dress to create her first window displays,” Flora wrote.

Flora, Prince and other dignitaries stood in front of the store’s huge chandelier to make the announcement on Monday afternoon, as a wealth of gems sparkled in cases around the room.

“Sometimes we forget the value we have in local businesses,” said Mayor Paul Osborne, adding that often drawing new businesses to the area gets the most attention. “We have a real jewel in downtown Decatur.”

The Chamber also acknowledged the couple’s donation of hours and dollars to community organizations including the American Heart Association, Mount Zion Foundation and Junior Welfare Association.

Flora said he was honored by the Chamber’s distinction. He originally planned to attend law school, but decided to take over the family business when his parents decided to retire.

“We have to regain the loyalties as new business owners that were enjoyed by the previous generation,” he said.

The Floras are off to a good start.

Sales have increased by 10 to 15 percent per year in the past five years. The couple hopes someday to expand by opening another store in Springfield, Champaign or Bloomington.