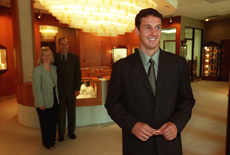 NEXT GENERATION: John Flora, 22, has joined W.T. Flora Gems, in business since 1921. John will be working alongside his parents, Ware and Becky Flora.

John W. Flora, 22, reported for his first day of work Wednesday as a new vice-president of W.T. Flora Gems in downtown Decatur. His mother, Becky, is a fellow vice-president, and his father, Ware, is president and keeper of the family stories, which shine as brightly as the jewelry in the Flora display cabinets.

As Dad explains, his grandmother Rosamond was keen to get the family away from riot-torn West Frankfort when she came to Decatur in 1921 and bought the Frank Curtis Jewelry Co. store in Decatur.

Rosamond and husband Walter ran a jewelry store in West Frankfort, which was in the grip of massive labor unrest and Ku Klux Klan terror. “The story goes that this mob pulled my grandfather out of his home one night and were going to lynch him,” said Ware, 49.

“But it turned out they had the wrong person and really wanted his neighbor. So they let my grandfather go, and then they lynched the neighbor.”

Experiences like that could take the shine off of any business, and Rosamond decided her family needed out. She heard about the sale of the Decatur jewelry company and fell in love with a city she described as full of “lovely parks.” The owners of the grand Curtis store, founded in the 1850s, just about laughed in her face when this diminutive woman walked up to them and said she was going to be the new owner.

“She went out of there, went back to West Frankfort, emptied her bank account of $50,000 to pay for the store, and carried it in a paper bag back to Decatur,” said Ware. “She was one determined lady.”

Determination has been a Flora hallmark every since, the company always pursuing the single-minded goal of selling the very best. It is an authorized dealer in top-of-the-line Rolex watches and offers a selection of diamond, platinum and gold jewelry to dazzle the most jaded eye.

Ware Flora felt the irresistible tug of the family business in 1979 and gave up his career as a lawyer in Colorado for the chance to take over from his dad, William T. Flora. John, who loves politics and has a bachelor’s in political science from the University of Colorado, nevertheless feels the same pull to be part of a golden family tradition.

“I wanted to live here in Decatur, where so many of my friends and family are, and I am excited about joining the family business,” said John, who points out that Flora Gems has just had its best year ever. “I think I’ve arrived at a very good time,” he added.

He’s also feeling pumped up after graduating in August from the Gemological Institute of America in Carlsbad, Calif., and learning the intricacies of evaluating diamonds, what John calls one of our “most condensed forms of wealth.”

Looking ahead to the future of the business that will be invested in him, John says he plans to continue the family tradition of avoiding lynch mobs and ensuring success by doing what the company has always done: “Offering quality jewelry to the people of Decatur and making them feel they can come in here and buy from someone they can truly trust,” he said.